The System AUV 5000 V2 is designed specifically as a dual-purpose side scan sonar with an optional Bathymetry payload for Autonomous Underwater Vehicles (AUVs). The Klein System AUV 5000 V2 simultaneously generates eight adjacent parallel sonar beams on each side of the AUV while employing advanced beam steering and dynamic focusing for unmatched Along Track resolution that is not possible using single beam or multi-pulse side scan technologies. With the addition of the swath bathymetry sonar, the AUV 5000 V2 employs advanced interferometric signal processing to produce simultaneous estimates of the seabed topography out to the full swath extent of the sonar, typically 10-12 times the overall altitude of the AUV. The added seabed topographic measurement is post processed and co-registered with the side scan backscatter imagery to more accurately position seabed targets.

Sonar beam forming is done by the AUV 5000 V2 electronics thus allowing for integration with onboard CAD/CAC software. 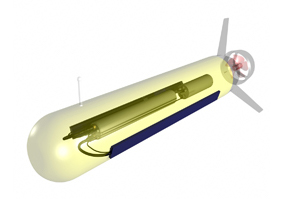